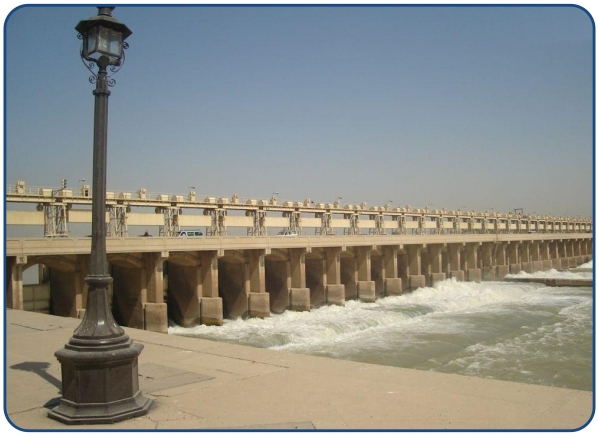 The Kut Barrage is a prominent power generating barrage lying located on the Tigris River. The barrage was originally conceived by the Ottoman Empire; but the start of construction was put on hold after World War I.
Following the war; Iraq’s ruler King Faisal I made known his desire for gigantic irrigation schemes that would control the flow of the Tigris and Euphrates rivers. The rivers bordered and often flooded his otherwise arid land making large scale agricultural production difficult. The first step in achieving his goal would be to build a barrage across the Tigris at Kut-el-Amara to divert water into the vast desert plains. Balfour Beatty was chosen to build the barrage based on the company’s known ability and experience in conducting such large scale projects. George Balfour of Balfour Beatty along with Andrew MacTaggart saw Iraq as having great potential with its vast oil wealth and favourable geographical position.

After the signing of the contract in 1934; construction finally began on the 11th of December of that year by Balfour Beatty (as part of their overseas expansion) and was completed after four years on the 29th of March 1939 at a cost of 1,119,430 Iraqi Dinars (£1 ¼ million). The project used 325,000 cubic yards of concrete as well as gravel and sand delivered by barge from Wadi on the Iranian border. The purpose of the barrage was to control the flow of the mighty Tigris River providing hydro-electric power as well as irrigation to the surrounding agricultural land. 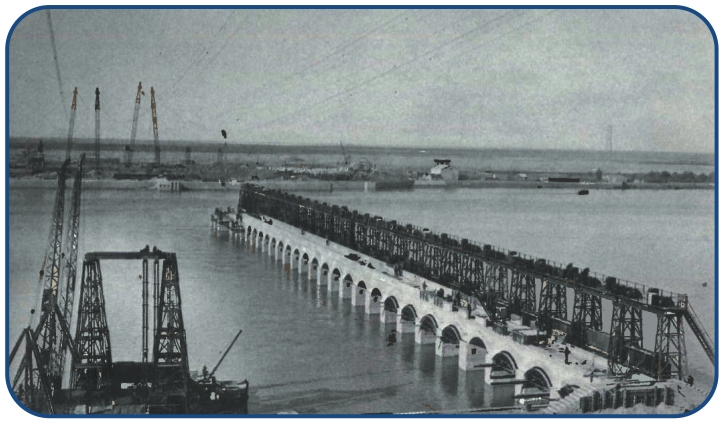 The chosen site for construction of the barrage was very remote and just getting there proved to be an arduous task. A young David Balfour working on the site as an engineer recalls how barren the location was. He described how ‘everything’ had to be built from scratch including a camp and hospital providing medical facilities for the construction crew.

Prior to construction it was realised that a significant portion of labour would have to be imported from the U.K. due to a shortage of experienced local workers. 45 staff from England came to train the locals who despite lack of skills were eager to learn. Wages were paid between a minimum of 8 old pence to a maximum of 2 shillings per day. Again, paying the labourers provided difficulties of its own. One of the brothers of the local Emir was entrusted to provide the salaries yet he could not provide the money as there was none in Kut. As a result the coins had to initially come from Baghdad until enough money entered the local economy through circulation at the markets and bazaars.

George Balfour, following an early visit, commented on how keen and enthusiastic the workers were which he said did much to allow the work to proceed smoothly with precision. In addition Mr. Balfour had the opportunity to visit Jerusalem where he found himself impressed with the ‘enormous developments taking place’ in the city; as well as the speed of with which infrastructure such as electricity was being put in place. The pace of development in parts of Middle East was described as overwhelming.

After a few minor setbacks the construction of the barrage proceeded as planned with a rapid transformation of the desert site taking place. The location was rapidly transformed from a barren, inhospitable patch of terrain to that of a bustling construction site teeming with activity.

The barrage was a very large infrastructural project for the region being 500m in length containing 56 gates (6m wide) with each gate consisting of two chambers (2.25m wide). In addition the barrage contained an 80m wide and 16.5m deep passage for boats to cross from one side to the other. Following the opening of the barrage a massive area of surrounding land was put into agricultural production which would have been impossible prior to its construction. In addition the top of the barrage provided a convenient bridge crossing over the Tigris River opening up trade routes throughout in the region.

By the late 1960’s it was realised that the aging barrage was in need of repair and expansion. Therefore in 1967 the barrage was extended and widened on both sides in partnership with the Al-Burhan Group which provided engineering and constructional expertise. The reconstruction provided the barrage with greater irrigation capacity as well as renewed structural integrity to continue operation. The newly re-opened barrage also allowed for increased traffic flow via the addition of a two-way passage across its top instead of one-way lane operating previously. Overall the barrage has provided the surrounding area with a multitude of benefits from massive irrigation to new transport routes.

During the 1st Gulf War the barrage was hit twice and in need of repair. However following fast reparation work; the barrage was re-opened again on the 1st of March 1992 and continued its vital operations.

George Balfour described the barrage as a ‘fine piece of work’ which the government, engineers and constructors can all be proud. He went on to say how he believed how Iraq, properly developed, had a great future.