Basra Airport City is the exciting masterplan proposed by UK-based, International design firm Benoy, of the regeneration of Basra Airport and its surroundings in Iraq. The masterplanning site is about 6 km long and 2 km wide, giving a land plot area of about 12 million square meters and a buildable plot area of about 8 million sqm. The entire masterplan proposed is apportioned into 5 broad phases for design and construction, with a built-up area of about 8 million sqm. In each phase, the development is planned as a self-sufficient and ecologically sustainable township that would provide a national and international hub for a 21st century city environment, including areas for culture, commercial and retail, centred around the expanded Basra Airport, creating Basra Airport City.

The purpose of this project is to propose the commercialisation of Basra Airport and its vicinity. This proposal is a joint venture between the Government of Republic of Iraq and Mesopotamia Property Holdings to develop, design, construct, finance, manage and maintain a world class commercial, residential, leisure, cargo and passenger hub at Basra.

The project development is situated north of the existing Basra Airport Terminal. The development proposes to include the following program:

The masterplan sketch design spans a site area of about 6 km by 2 km to produce a built area of almost 8 million sqm. The underlying datum of the city grid takes its reference from the existing geometry of Basra City.

Historically the cradle of the Summer civilization and proposed Garden of Eden, Basra is now a thriving city with a population of one million, situated 545 km from the capital city of Baghdad. Basra is also the most important port in Iraq and the second largest city after Baghdad. 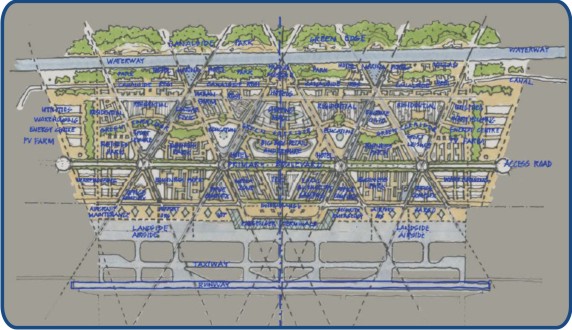 The architectural masterplan sketch outlines the over all structure of the proposed site. The colour coded key difines where the Residential buildings, hotels, commercial, retail, leisure, air port and warehouse will be. 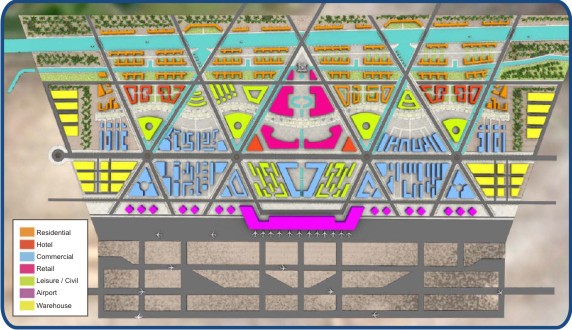 On average, each major phase is about 1.3 million sqm in plot size. This can be further sub-divided into minor phases, where smaller individual plots can be individually developed and managed on a micro-level. Each of these sub-phases will be scale-able in the overall masterplan to achieve full integration of public spaces and facilities.

The airport terminal and its auxiliary facilities will be phased under a separate development due to the specialist nature of its operational requirements. The masterplan has also made provision for the potential growth of air traffic volume with a future runway extension down south.

The site has been distributed into various programmatic zones and functions. The underlying masterplan strategy is for the residential blocks to be situated furthest away from the airport and close to water bodies to assist natural cooling and ventilation.

The masterplan is conceptually distributed into several horizontal bands which progressively move away from low-density mixed use commercial residential zones.

The band closes to the airport terminal consists of airline facilities and auxiliary services. The next band moving northwards comprises of large warehouse storage facilities, convention halls, industrial businesses and workshops. The next band across the main traffic spine comprises of commercial businesses and office blocks with pockets of business hotels, colleges, sports complexes and civic infrastructure supporting the immediate vicinity. The big-box retail are also located in this band for ease of trading.